I've reviewed the MTH Premier woodsided passenger cars.  These are models of late 19th century cars that go very well with the Premier line models of locomotives from the same era, such as the exquisite model of the New York Central #999, and are probably the finest passenger cars yet produced by MTH.  A photo of one is below; there are lots more photos with the review on my Train Reviews page. 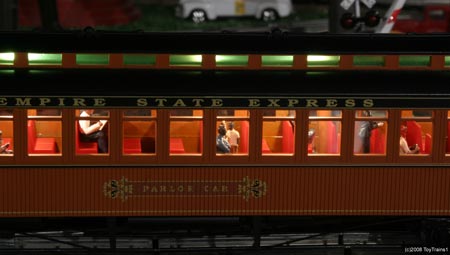 I also notice that I've neglected to mention that MTH DCS v.4.01 was released.  This point release corrects the problem with Rev. G TIUs that I mentioned previously.  There's one small bug in this release (you show me software without bugs and I'll show you vaporware) that affects only the older 5v PS2 locomotives — if you move one of those locomotives to the inactive list, you'll be unable to move it back to the active list without first deleting it and then re-adding it.  The simple work-around is to just not make such a locomotive inactive in the first place (yes, I know, lash-ups are a special case).  I expect that there will be another bug-fix point release in the not-too-distant future.

This entry was posted in Trains. Bookmark the permalink.