Remember that I mentioned woodworking on the home page?  In order to display the model trains in my collection, I had several display cases custom built out of red oak.  They are quite beautiful and well crafted, but were also quite expensive.  They contain my postwar O27 passenger car collection, as well as some more modern motive power and passenger sets.  That's the layout ready yard in the foreground.  Up above, you can see the reflections of some of the track lighting that I've installed to illuminate the layout and displays.  I find that halogen flood lights really bring out the colors! 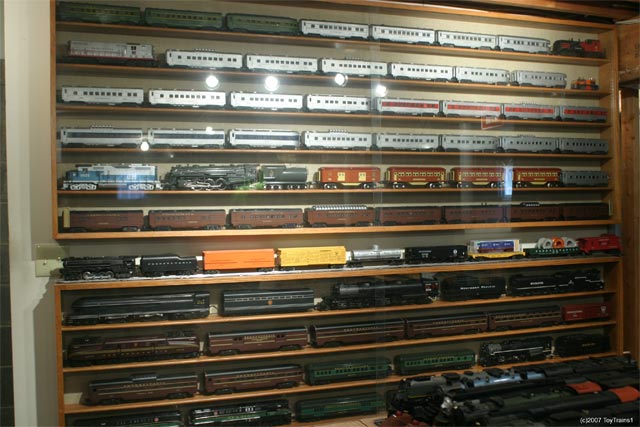 Once I saw how the display cases were made, I combined my love of model trains with my love of woodworking, and started building display cases myself.  The following photos show a few of the ones that I've built.  The first three are of red oak, are mounted on the wall, and have sliding glass doors.  They've been stained a deep, rich mahogany.  All of the cases are sealed with several coats of satin finish polyurethane, and wet sanded with 400 grit paper for a very fine finish.  Above the third one, you can see some more of the track lights. 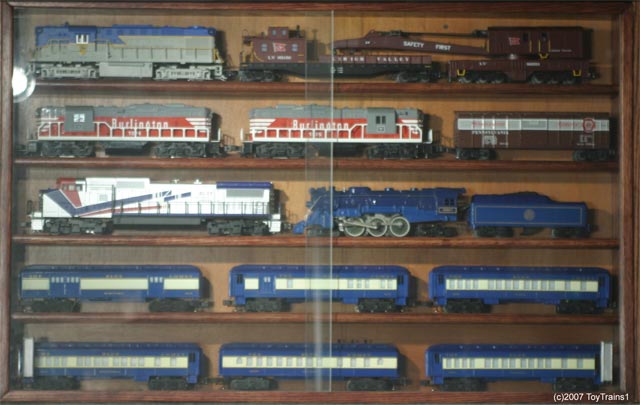 The next case is made of pine, sits on the floor, and, given that fact, has sliding acrylic plastic doors rather than glass -- it is the basement, after all, and glass in a floor sitting case is just begging for trouble.   Incidentally, the trains in the display case are every modern reissue 6464 boxcar that Lionel has issued, as well as the 'new' 6464 boxcars that they have come up with. 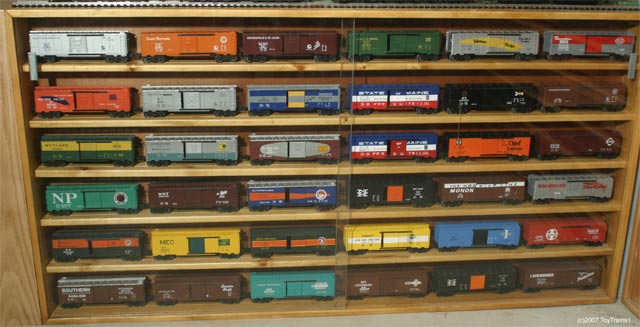 Here's a shot of another case I've constructed of red oak, with the polyurethane still wet!  It's 81" long by 34" high, and will contain my collection of MPC short madison passenger car sets.  It will sit on the floor (and will thus have acrylic plastic doors) at a right angle to the case shown above, which is why I didn't stain the red oak. 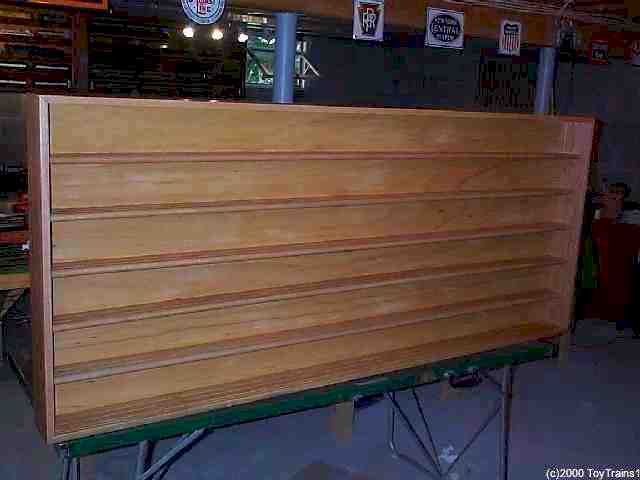 Here it is, in place with the acrylic plastic doors, with part of the collection in it.  I managed to fit only the first three sets (Milwaukee Road, Pennsylvania, and Baltimore & Ohio).  ::sigh::  It looks as though I need to build a few more cabinets!

The pine case shown above is directly to the left of this case, at a right angle to it. 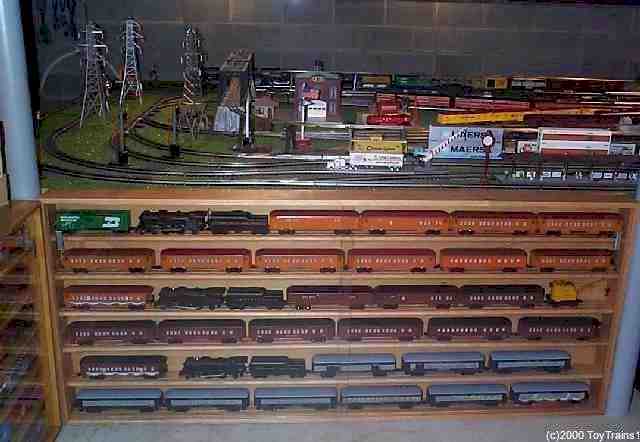 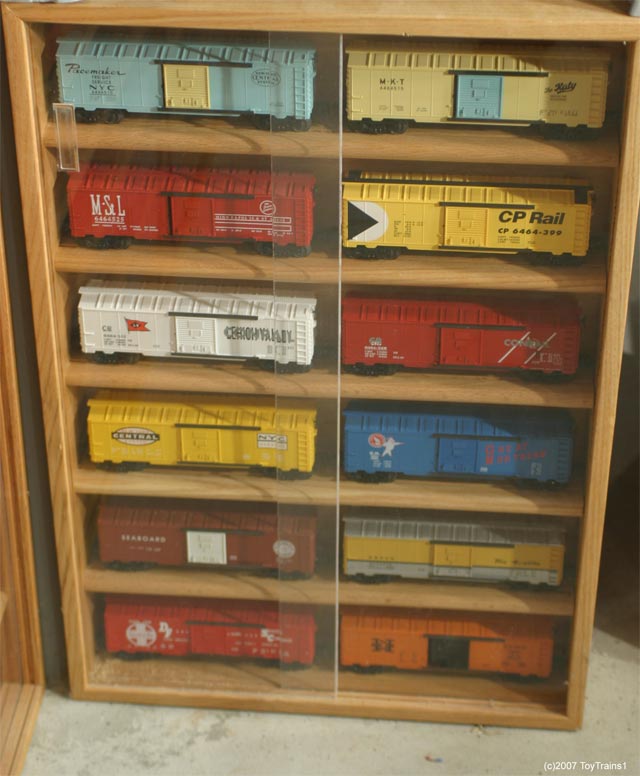 I've now completed the large (80" x 34") display case that sits at the front of the control panel.  For the first time, I've used a water-based polyurethane instead of oil based, and am quite pleased with the result.  Two coats in about two hours, without skunking the entire house.  The first two photos below show the new case from different angles -- it contains the remainder of my collection of Lionel short madison car sets, as well as miscellaneous locomotives and cabeese  The third photo shows the front of the layout as it now appears, with the cases in place. 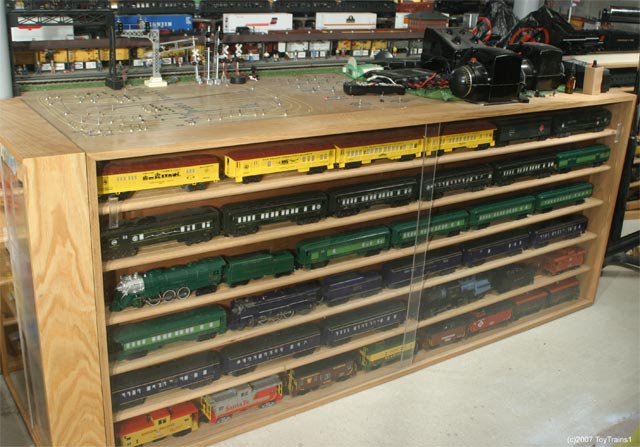 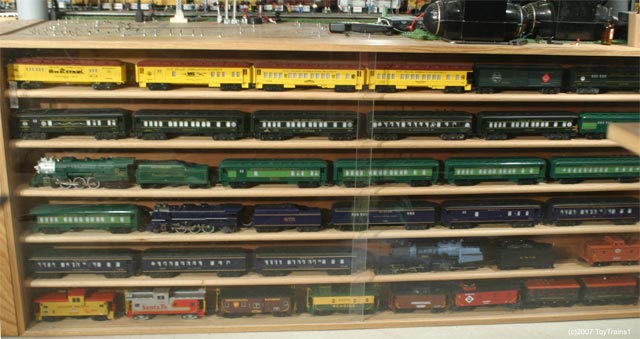 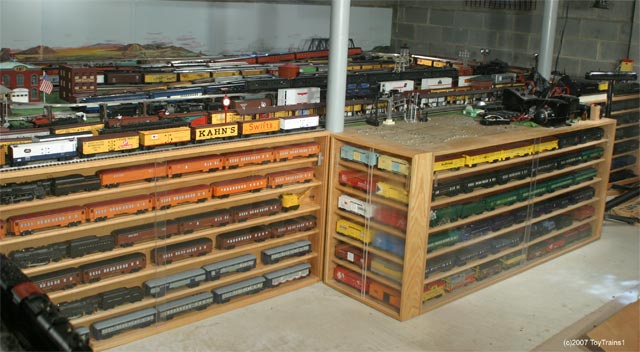 So, time to do some more woodworking. Here's the latest effort, which will go to the right of the control panel -- the machining is done, but it still needs to be sanded, assembled, have a back put on, and finished.  I will once again use the water-based polyurethane. 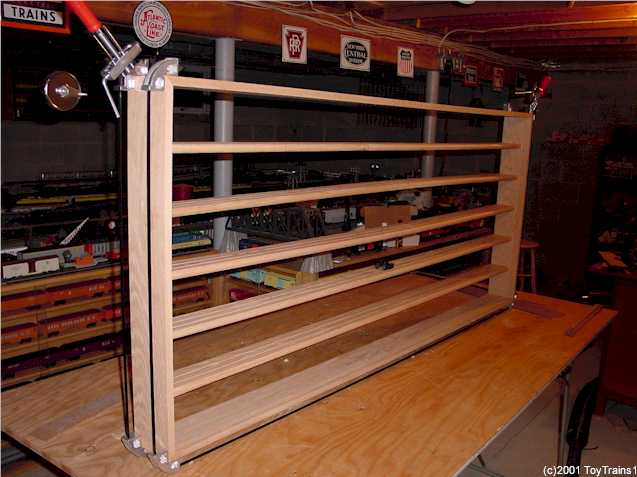 I've finished the case (I will pick up the acrylic plastic doors shortly), have put it in place, and have filled it with trains.  Unfortunately, it's full, as you can see, but I managed to get none off the layout -- it was filled just with trains that were stashed here and there.  ::sigh:: Time to head back for more red oak! 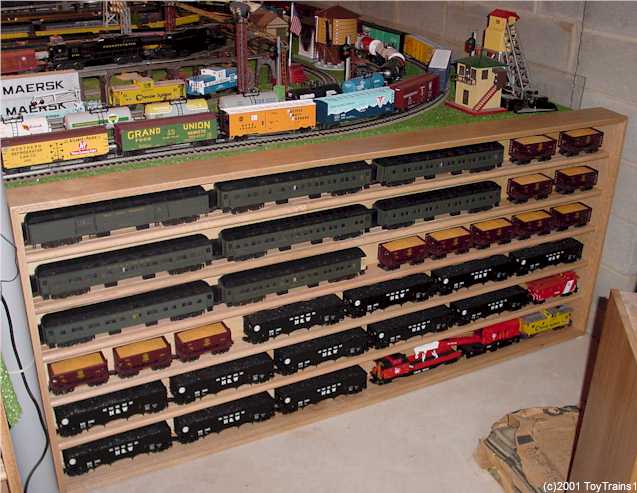 In the intervening years I've built another large red oak display case that's on the left side of the ready yard.  At 90" long, it's the biggest that I've built to date even though it seems foreshortened given the angle that I had to shoot this photo from. 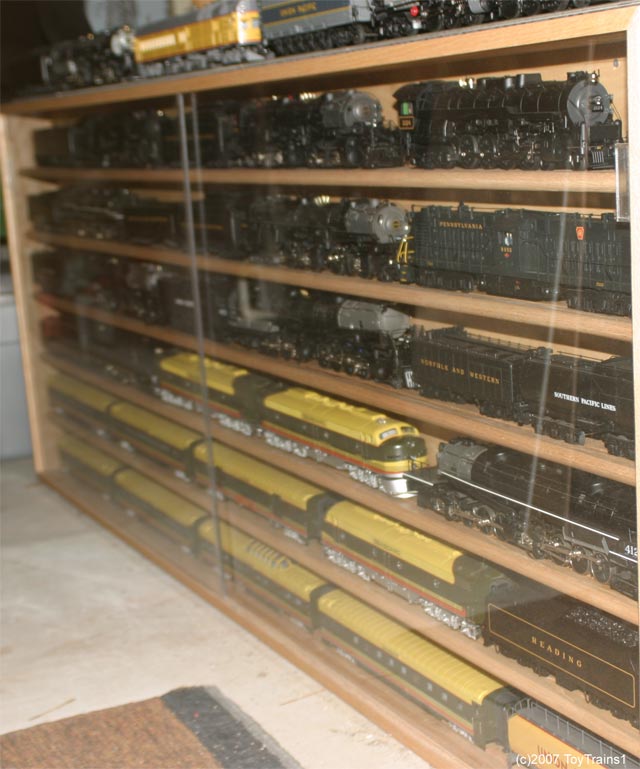 With that case on the left and the pine case (up above) on the right, the end of the ready yard was left looking bare and unfinished. 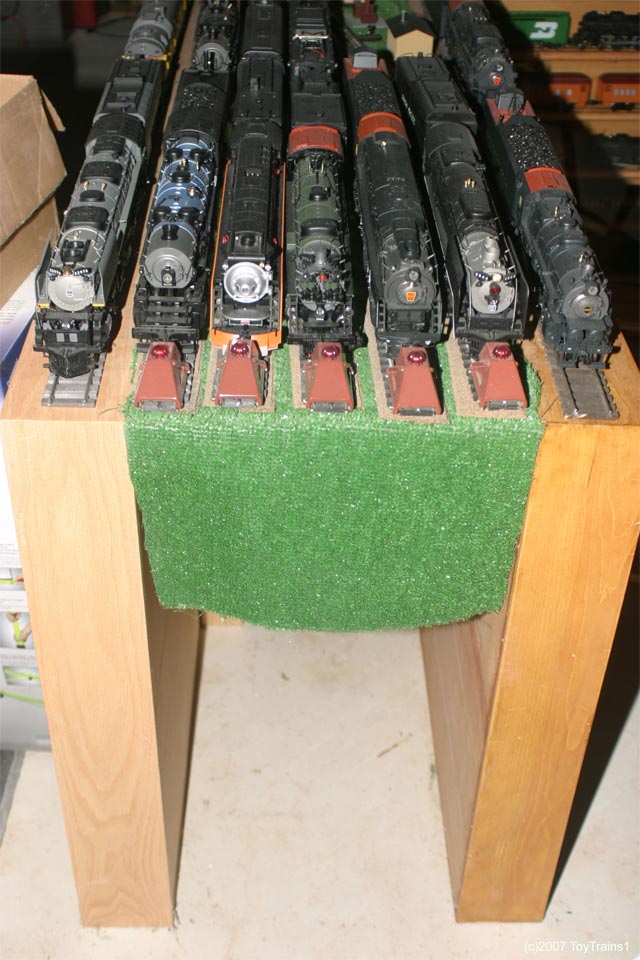 Until now.  This past weekend (April 2007) I completed another small case that spans the end of the ready yard and the display cases that are on either side of it.  Here it is, the tenth one that I've built.  As you can see, I've also got track on top of the display cases on either side of the ready yard, the better to display still more trains!  All MTH Premier steam locomotives, from the left you have the UP Challenger, the Erie Triplex, the SP GS-2 Northern,   the GN S-2 Northern, the PRR Q2, the UP F-E-F, and the PRR Decapod.  The display case itself holds a dozen of my AtlasO reefers. 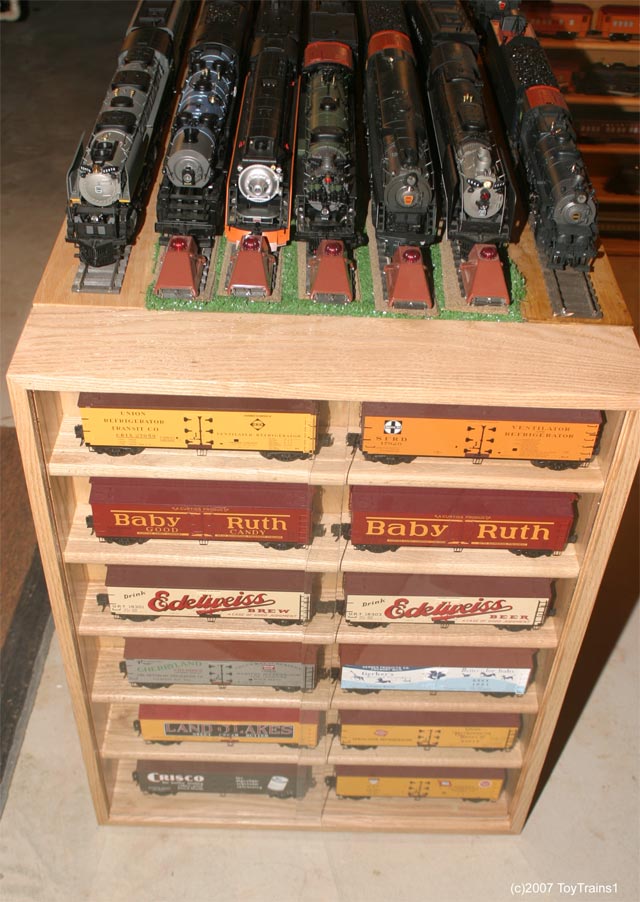 Well, it's now July of 2007 and I'm in the process of completing my eleventh display case, a small one like the one above that will go on the right-hand side of the control panel.  Here's the case with the first coat of polyurethane, rubbed-down with 400 grit wet/dry paper and waiting for its second coat. 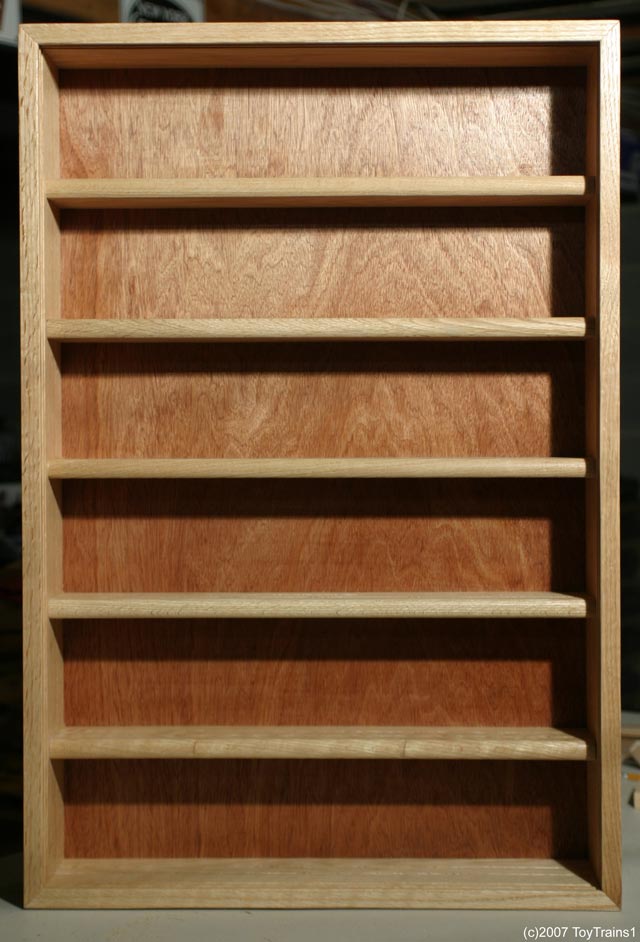 And here it is finished, with acrylic plastic doors, holding the remainder of my 6464 boxcar collection.  A total of seven display cases now completely wall off the front of the layout. 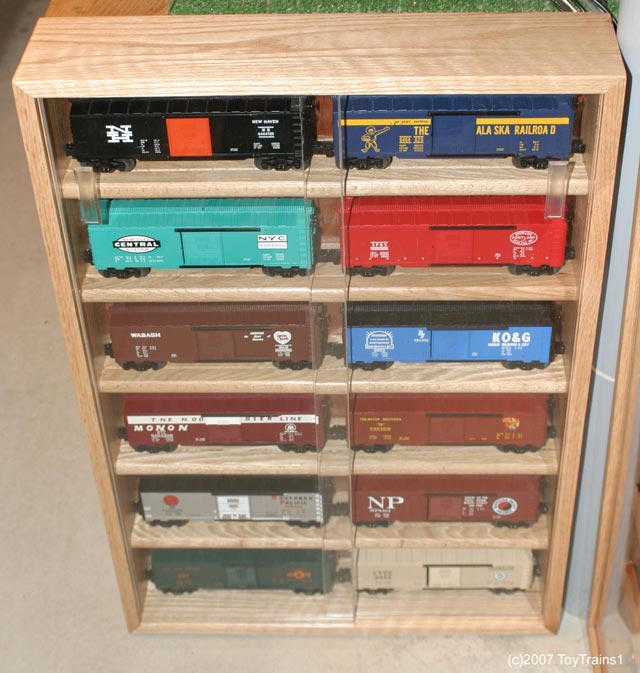 I've gotten ambitious!  Less than a month after the last case, I'm once again building another display case.  This one will go under the lower of the two that I had custom built for me way back when (photo at the top of this page).  Though it's only 22 inches high to fit between the bottom of the other case and the floor, it's a full eight feet wide (the widest I've ever built) which makes it very clumsy to work with.  I've thus far got all the machining done and it now just needs sanding, assembly and glue-up, a plywood back, and finishing.  Here it is as it is now, dry-fitted and held together with clamps. 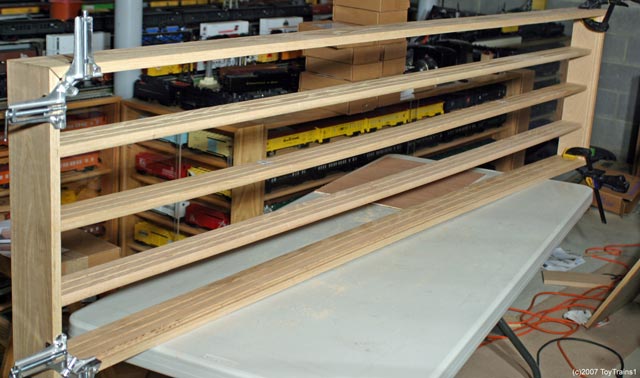 And here, a week later, is my self-built display case number twelve, just about finished and in place.  I've stained it to closely match the case it sits below and coated it with water-based polyurethane.  I think it came out rather nicely!  All I need to do in order to finish this project is cut and fit the acrylic plastic sliding doors.  The case already holds thirty-two of my AtlasO reefers.  With the collection of reefers currently numbering 209, there's a limit to how many I can have on the tracks at any one time so this has freed up some very welcome space on the layout. 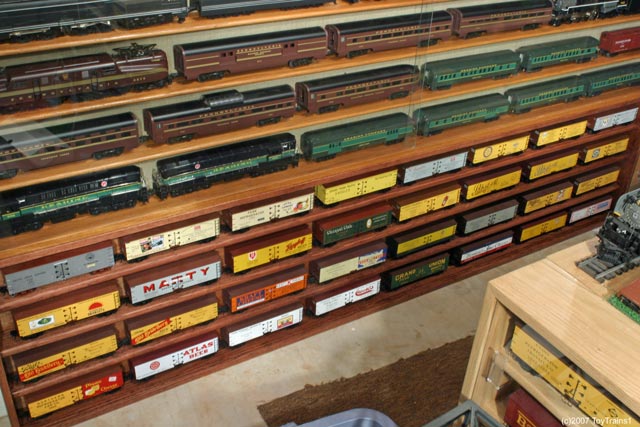 In October of 2010, I built another small display case to mount on the wall toward the front of the layout.  It will hold some of my passenger cars and free up space in one of the cases above for locomotives that have just been sitting around the layout.  Here it is just about finished, waiting for touch-up sanding and a few coats of water-based polyurethane.  Once it's mounted on the wall, I'll measure for the sliding glass doors. 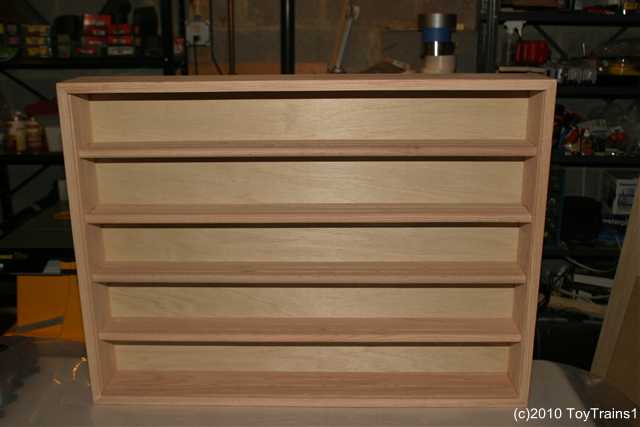 And here it is, finished, mounted on the wall, trains in their new home, and just waiting for the sliding glass doors. 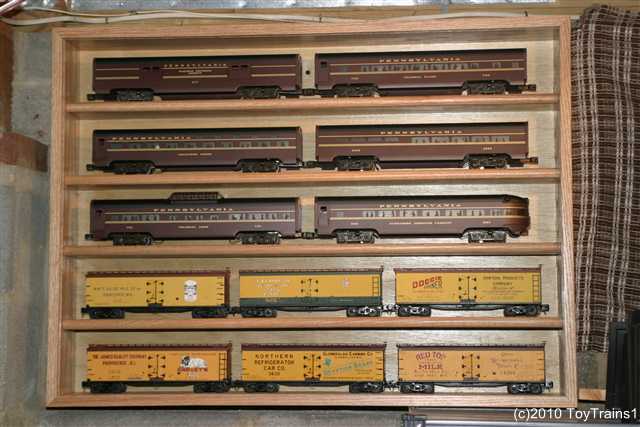 The sliding glass doors are finished and installed. 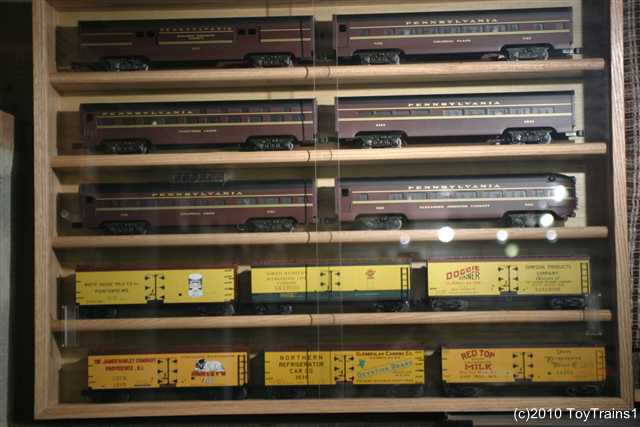 If you'd like to know how to build display cases like these, I've prepared a photo essay on how to build them.  You can find it on this page -->  Display Case Construction