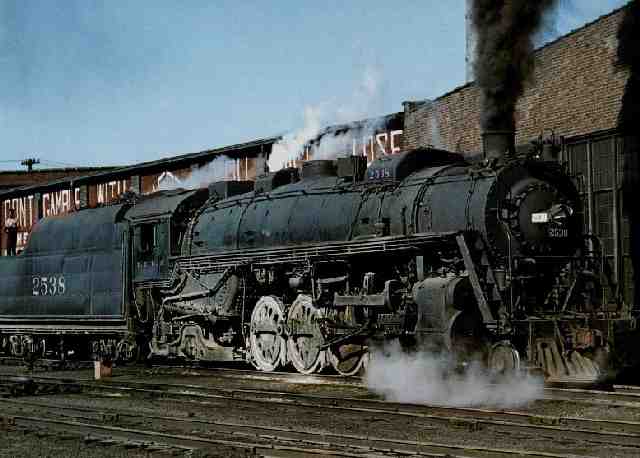 The 4-8-2 Mountain steam locomotive (known as a Mohawk on the New York Central) was one of the more powerful of the mid-period steam engines.  It is the direct ancestor of the 4-8-4 Northern steamer, which gained an added trailing axle when the new "superpower" design enlarged the firebox (much as the Mikado evolved into the Berkshire).  Shown above is one from the Illinois Central (IC); shown below is one of the enormous M-1 Mountain locomotives of the Pennsylvania RR (PRR), now preserved at the Railroad Museum of PA. 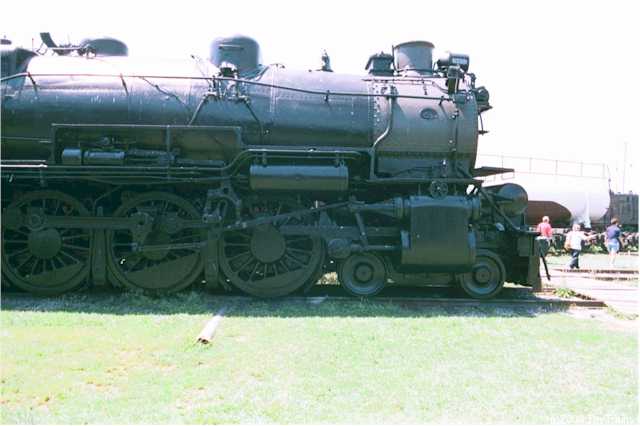 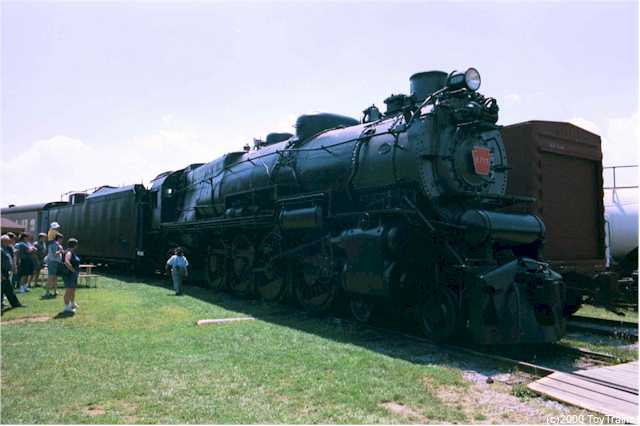 In April of 2003, MTH released their Premier line model of the PRR M1b Mountain. It is an exquisite piece of modelmaking that looks great and runs incredibly well.  Here are some photographs showing the details of this model.  The first is an overall shot of the locomotive.

The second is an overall shot of the tender. Yes, it's THAT enormous!

The next shows the detail of the "face" of the locomotive. Note the scale coupler. 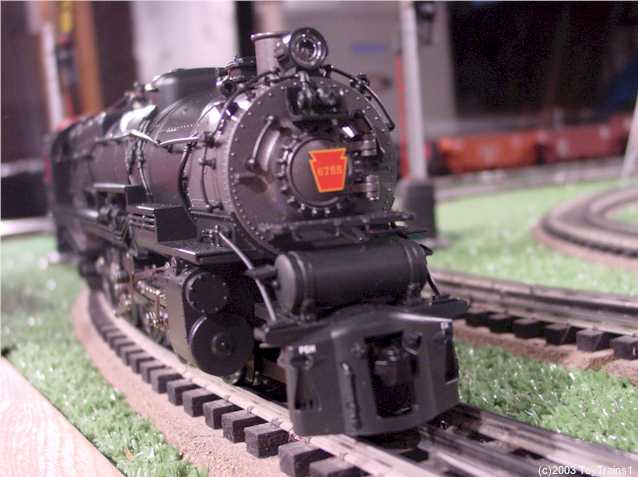 Presto! The scale coupler drops away into the pilot as the prototype did! 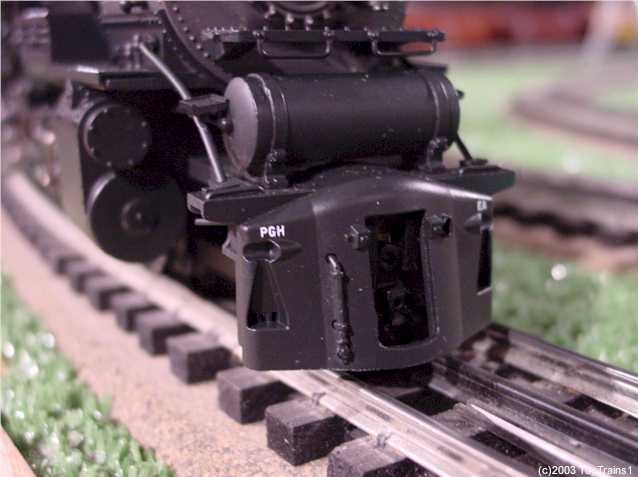 Here's detail of the sand dome and the various lines coming out. 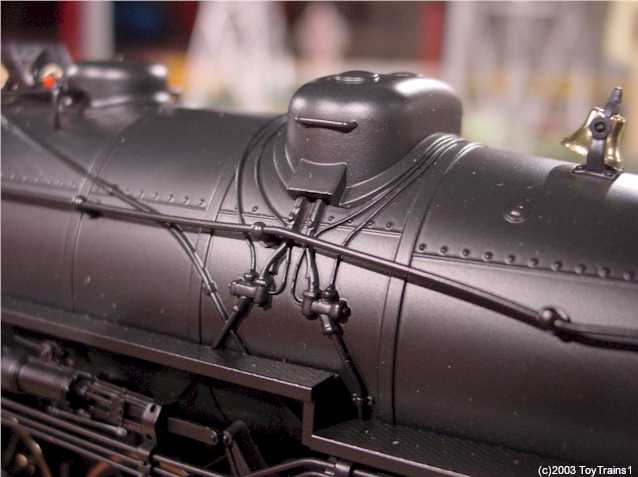 Further down, here's detail of the valve gear, rods, and drivers. 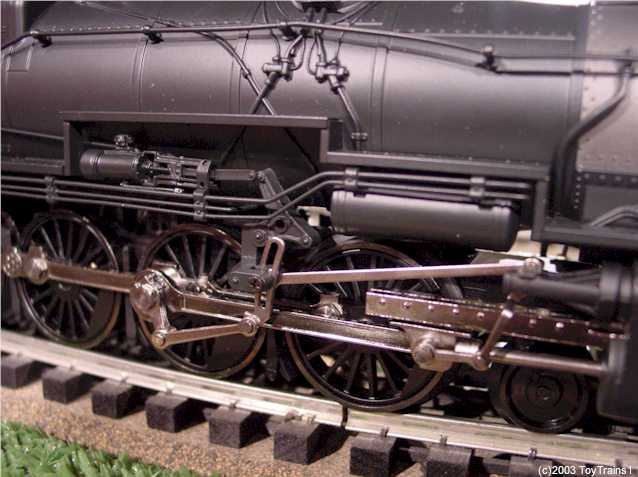 Detail at the top of the boiler and firebox. 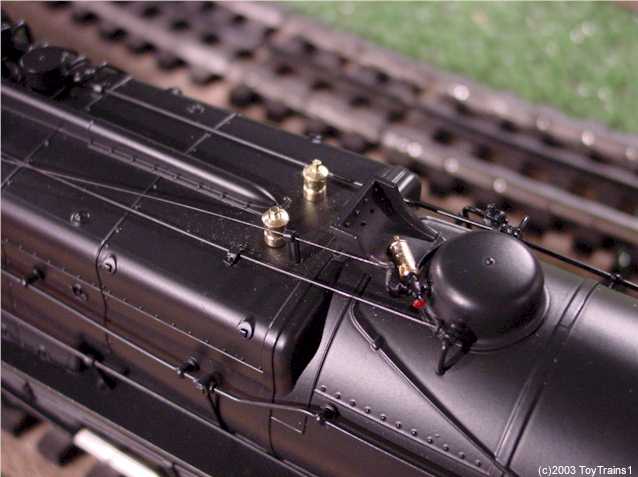 The cab, with sliding windows and a very nice engineer figure. 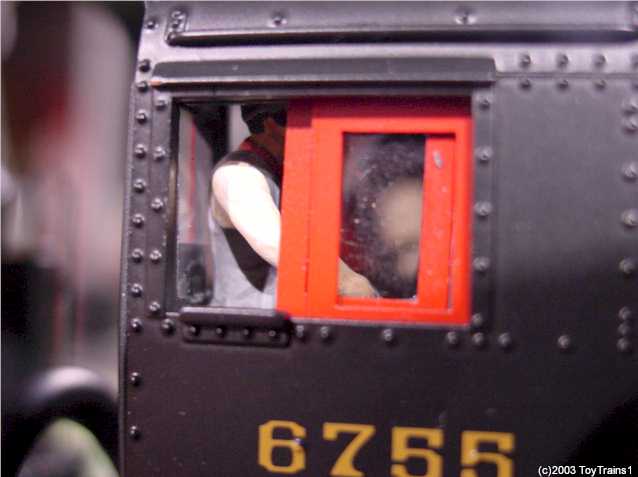 The top of the tender deck. Note the six hatches. 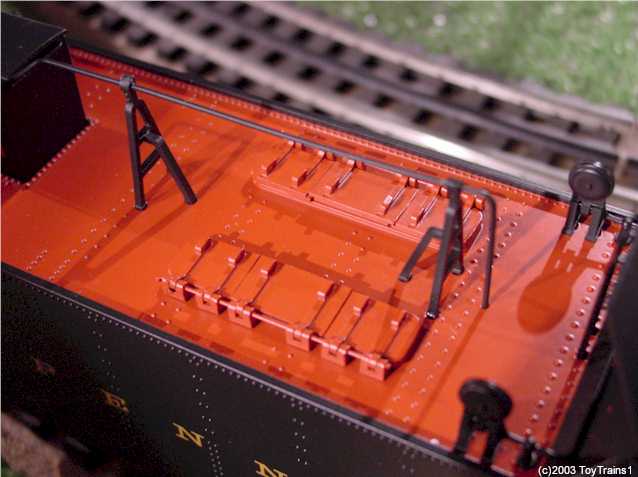 The hatches open to reveal the volume control, charging jack, and smoke switch. 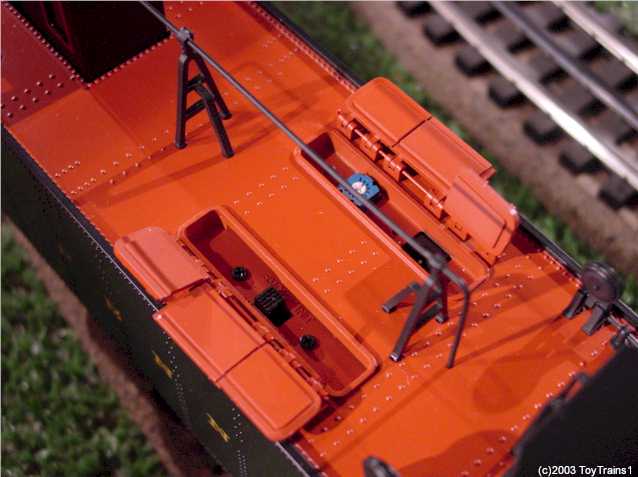 Finally, the doghouse, equipped with its own figure. 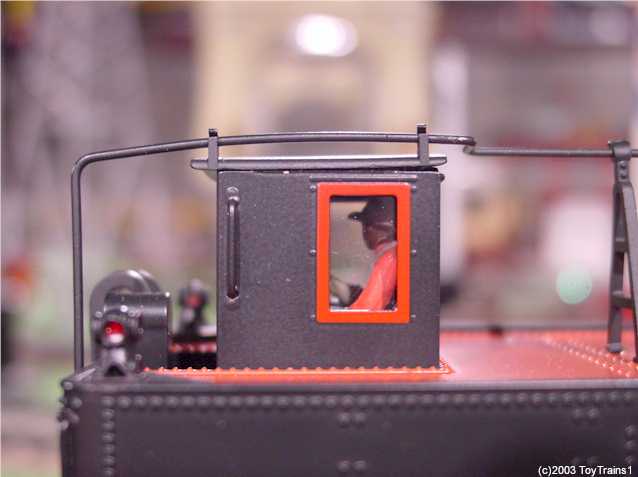 Here are a few shots of the prototype New York Central Mohawks. 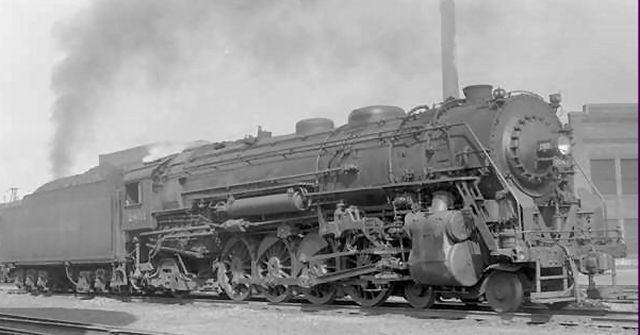 In October of 2009, MTH brought out their long awaited Premier model of the Mohawk.  It is an exquisite model of the prototype.  The first photo shows the locomotive broadside.

The next photo shows the tender broadside.  Note the piping at the bottom of the tender -- it had to be added on after the tender was unpacked.

Here's detail of the rods, drivers, and valving.  Note that the removable smoke deflectors (elephant ears) have been snapped into place. 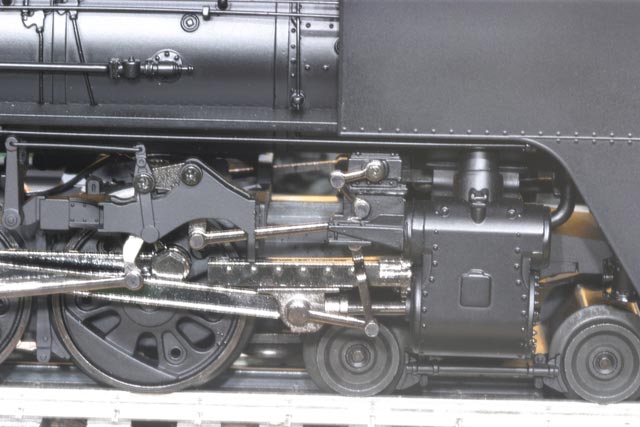 Here's detail around the cab. 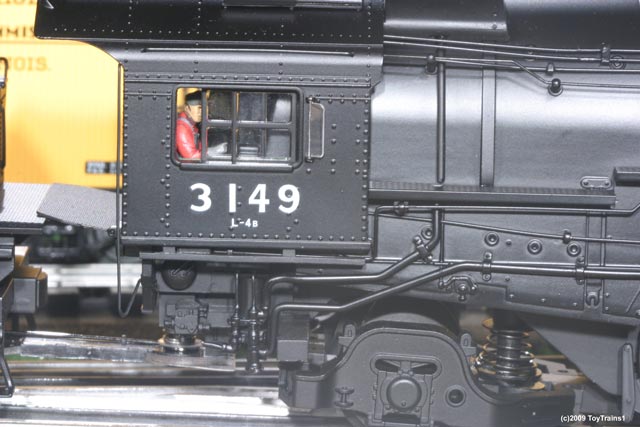 This is how it looks with the elephant ears in place. 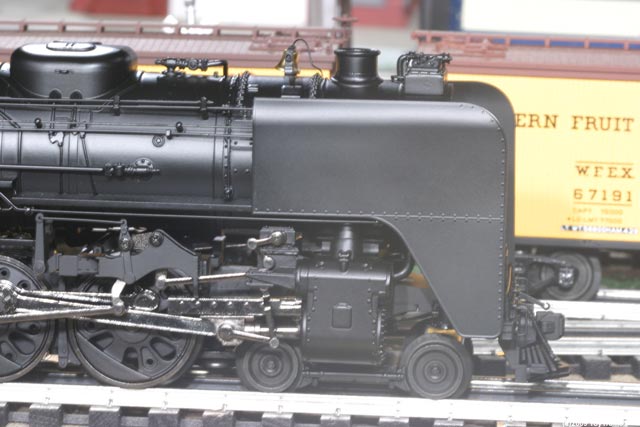 Here's the piping detail at the bottom of the tender.  It went on with four supplied screws. 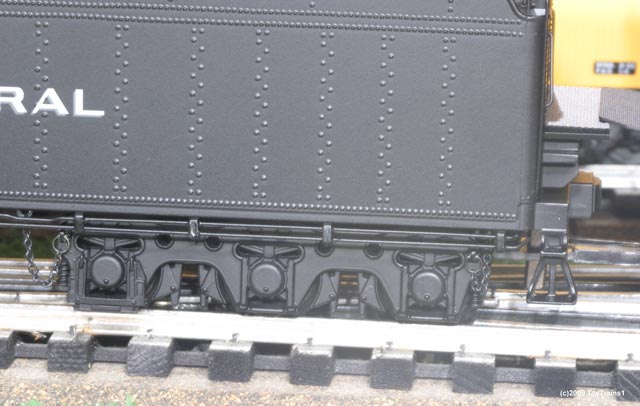 This is the face of the locomotive. 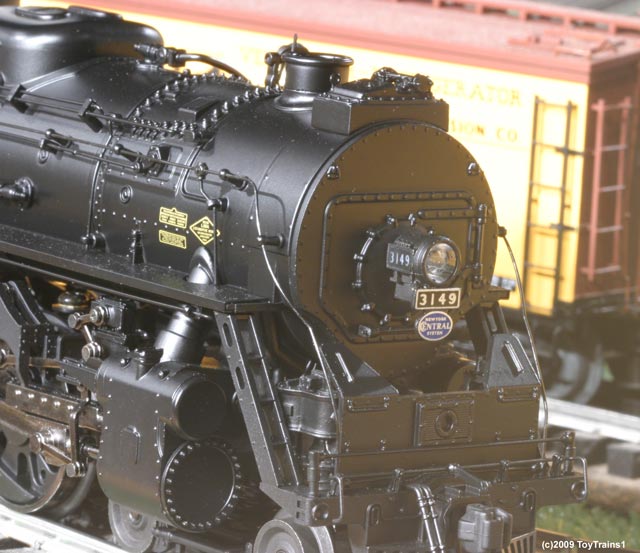 And this is the face with the elephant ears.

Here's the detail of the builders plates.  I still can't quite figure out how they can make type so small so legible! 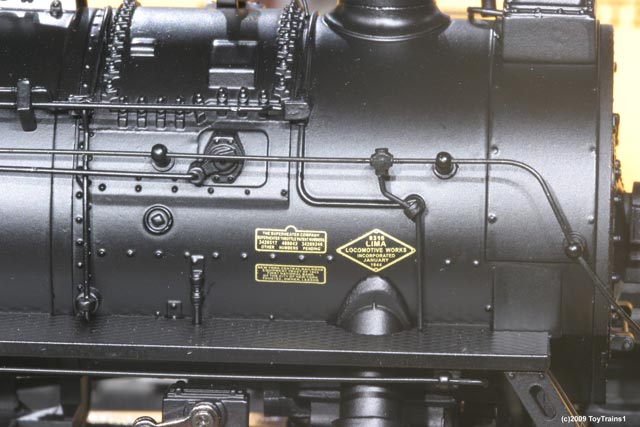 As with most every MTH Premier steam locomotive model, this one is a great smoker! 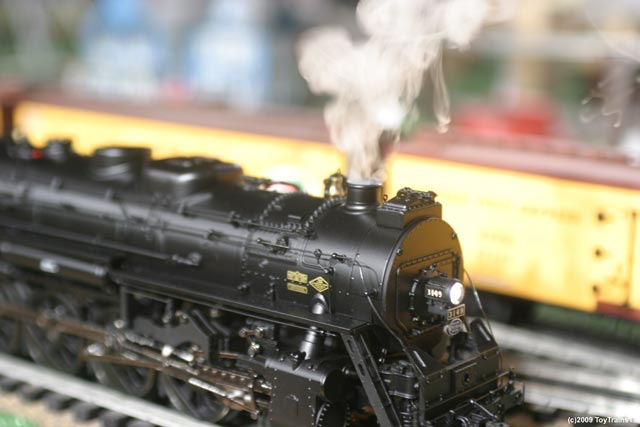