The Chesapeake & Ohio (C&O) 614 (called a Greenbrier by that railroad) was one of the few big passenger steam locomotives that was still running back at the end of the 20th century.  At times during those last few years, it pulled an excursion train on the right of way of New Jersey Transit (formerly the Erie) from Hoboken, New Jersey to Port Jervis, New York.  I was lucky enough to be on two of those excursions, and took the following pictures during those trips.  Standing next to a locomotive such as this, you come to realize that they were almost alive.  The first shot is the locomotive in action at Port Jervis.

The next shot is of the tender.

The next is a close-up of the valve gear and drivers.   The mechanical complexities of steam locomotives are awe-inspiring!

The next shot is a close-up of the front of the locomotive.

The next is of the locomotive and tender sitting on the restored turntable at Port Jervis.

The final shot of the 614 is an action shot taken by Jeff Sumberg (an old friend from back in the BBS days).

Other railroads used Northern type locomotives, though the names varied, probably more than for any other class of steam locomotive.  C&O called them Greenbriers.  The Delaware, Lackawanna, & Western (DL&W) called them Poconos.  The Lehigh Valley (LV) called them Wyomings.  The streamlined Northerns on the Norfolk and Western (N&W) were called J's.  On the Southern Pacific (SP) they were called  Golden States.  On the Western Maryland, they were Potomacs.  Another type of Northern was the Union Pacific (UP) F-E-F (standing for Four-Eight-Four).  It is typified by #844, which is in excursion service to this day.  In late 2000, MTH brought out a Premier model of the 844, which incorporated the new Protosound 2 system with sound and smoke synchronized with the driver movement.  Combined with the excellent detail of the model, when running it appears that it's the real thing on the track and not a model.  The photos below show the model.

The photo below is a close-up of the excellent valve, rod, and driver detail on the model.

A photo of the prototype 844 is shown below.

On the New York Central (NYC), 4-8-4s were called Niagaras.  Pictured below is one of the NYC Niagaras, equipped with "elephant ears" to help disperse the smoke.  This is how the locomotive usually appeared.

Shown below is the MTH Premier model of the Niagara that was brought out in mid-2001.  I think you will agree that it's an excellent model of the prototype. 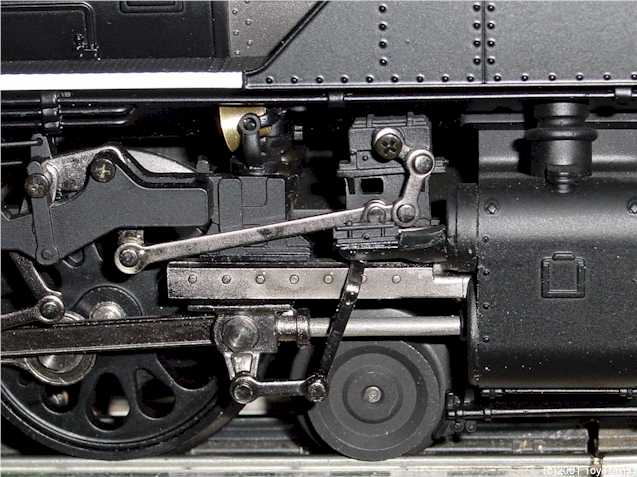 In December of 2004, MTH brought out a Premier line model of the Great Northern S-2, another Northern.  As you can see in the photos of the model below, it is quite a bit different from other Northern models. The first photo shows the locomotive broadside:

The second shows the tender:

The next shows locomotive and tender together:

The next is a detail shot of the front of the locomotive:

The fifth photo shows the locomotive and in a classic pose:

The next photo shows the detail at the top of the front end of the boiler; note the hinged cover on the smokestack:

The next shows boiler-top detail near the cab with all of the added-on piping:

The eighth photo shows the top of the tender, with the oil filler open to show the charging jack:

The next shows detail in the area of the cab:

Our final photo shows the detail inside the cab:

Here's a photo of the prototype, preserved in Havre, MT.

In March of 2005, MTH brought out a Premier model of the Reading T-1, still another type of Northern.  As you can see in the following photographs, it's a beautiful model of a beautiful steamer.  The first photo shows the locomotive broadside.

The next shows the tender

Here's the detail at the cab; note the arched window with sliding window panes.

Here's detail at the front end of the locomotive.

Finally, here's the locomotive in a classic pose.

Here are a few photos of the prototype T-1.